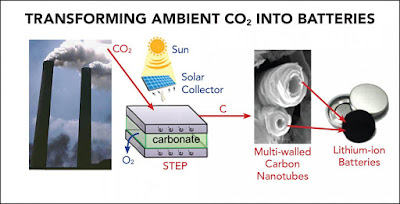 The whole world is fighting to reduce the amount of CO2 in the atmosphere. This is obviously because carbon dioxide is a well known environmental pollutant. CO2 is a naturally occurring gas that makes up a very little part of the atmosphere.
Carbon dioxide is considered to be one of the greenhouse gases. When heat is radiated to the earth by the sun, it warms the earth during the day and at night, the earth cools by releasing the absorbed heat back to the sun. It is the greenhousegases that absorbs some of the heat and then redirect them towards the earth. Greenhouse effect is the ability of greenhouse gases like Carbon dioxide, methane, nitrous oxide and fluorinated gases to trap heat. So the increase in greenhouse gases like carbon dioxide automatically increases the amount of heat that is caught and radiated back towards the earth and this keeps the earth warmer than it should be.
Due to human activities like the industrial revolution starting from the second part of the 1700s, there has been a steady increase in atmospheric CO2 which is considered to be bad for our planet. This is bad because this gas will help increase the amount of heat that is sent back to the earth. Although some have argued that CO2 is not the main reason behind the disturbing increase of the earth’s temperature.
Let’s not fail to mention that CO2 is also plant food.
The conversion
In a bid to reduce the amount of CO2 in that is released into the atmosphere, man has been trying to reduce the amount of waste generated, and also recycle things that cannot be reused.
The collaborative effort of Gary Pint, an assistant professor of Mechanical engineering at Vanderbilt University and Stuart Licht at George Washington University has brought into existence a process that converts ambient carbon dioxide into Lithium-ionBatteries.

Related: How Light Bulbs Work
Lithium-ion Batteries work through a cobalt oxide cathode and a graphite anode. Lithium-ion batteries have good power density and have about 80% – 90% charge and discharge efficiency. Lithium-ion batteries are used in laptops, consumer electronics and now they are of great use in electric vehicles.
According to the ACS central science journal, the conversion involves the use of a process termed STEP – Solar Thermal Electrochemical Process. “STEP” highlights the use of solar power in capturing atmospheric CO2. The captured CO2 is then used to produce carbon nanofibers (CFNs) and carbon nanotubes (CNTs) at high yield with the use of electrolysis using steel electrodes. The nanotubes produced can be used to make Lithium-ion batteries for use in laptops and electric vehicles. Sodium-ion batteries can also be produced using the CNFs and CNTs.
The nanotubes produced from carbon dioxide are used as a replacement for carbon anode used in regular batteries. Experiment has shown that these nanotube batteries provide energy storage that is 3.5 times above that of the regular sodium-ion batteries carrying graphite electrodes.
This sort of process no doubt helps in removing and then putting to good use the carbon dioxide that is released into the atmosphere.

The Hydrogen-fueled Sedan by Toyota

ReFlex: The world’s most flexible smartphone