Learn How the Self Fueling Ship Works 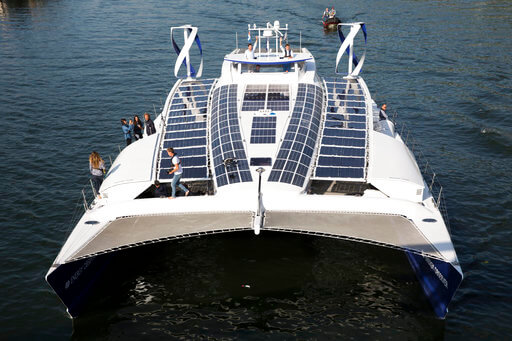 Frederic Dahirel and Victorien Erussard together with a research institute in France have turned a simple racing boat into a self fueling boat. The boat has set out on a trip from Paris to different destinations around the world and will continue with that travel cycle for 6 years.
The self fueling boat, also known as energy observer is designed to tap energy from the sun, wind and hydrogen cells. The boat is made with solar panels, wind turbines and hydrogen fuel cells.
The solar panel gets energy from the sun’s radiation and converts it to electrical energy which can be optimised and also converted to other forms of energy for use in the boat.
The wind turbines convert wind energy into electrical energy for use. Hydrogen fuel cells also give the system another form of energy. The hydrogen system produces electrical energy for the boat through a chemical process as explained in the article on hydrogen fuelled vehicles.
Now with these three forms of energy, the self fueling boat can keep itself running without running out of energy through the day and night. The Solar panels and the wind turbines will tap energy form the sun and wind respectively during the day and the hydrogen fuel cells system will produce energy during the night.
The self fueling boat is 100 foot (that is, 30.5-meter). It’s a big invention for the future because the energy produced in the boat gives off no amount of emission. The solar panels don’t emit anything; the wind turbines follow suit and the hydrogen fuel cell only emit clean water and electricity.
We are expecting more of the green energy solution projects in future because we are all in a battle to return mother earth’s climate to something less harmful.
The self fueling boat is really an interesting invention. And it’s interesting to know that it is expected to continue in its cycle of movement for six years.
And lest I forget, the boat actually cost 5 million-euro (that is, 5.25 million USD.) That amount could get you a nice shirt you know.
Related Articles
Converting C02 into Lithium ion Batteries
Amazing Restaurant Robot Waitresses
The Flexible Smartphone
Tweet
Share
Pin
Share
0 Shares
Posted inElectricity Innovation
Subscribe
Login
0 Comments
Inline Feedbacks
View all comments