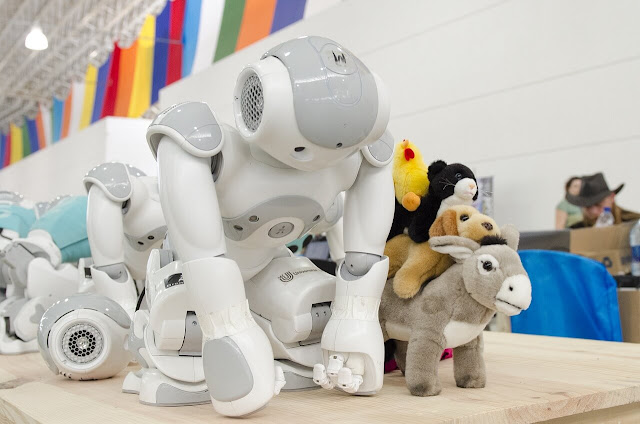 Somewhere in the city of Multan, a restaurant is making use of robot waitresses. Don’t ask me why they aren’t waiters. Everyone knows what a waitress does but most people surely are not sure how a robot waitress does her job. Customers of this upscale pizza restaurant in Pakistan are exhilarated by the experience of taking pizza from robots.
This doesn’t seem so weird to the residents. Comments made by customers show they are happy about it – actually it’s kind of exciting to be serve by a robot at a restaurant and many people are going to be back to the restaurant not just to eat but to enjoy the service of a robot. A lot of new comers will also be at the restaurant for the same reason.
Osama Jafari – the man who made the prototypes – says all the parts of the robots were gotten from local sources and it cost him a total of 600,000 rupees – 600,000 PKR. (You could use the currency converter at the top to see how much that is in your local currency or in US Dollars.)
Jafari, a 24-year-old graduate of the Islamabad’s National University of Science and Technology said he was inspired on seeing videos of robot waiters in China and with the support of his parents, went on to bring a modified version of what he saw to his own restaurant. He is planning to extend it to restaurants owned by all his family members. Now I’m not sure if he’s a Tech guy or a chef. You have to be multi-talented you know.
And the robots have names, the name of the first if Rabia, the second Annie and the third Jennie. Actually those names are used by humans. I thought robots should also have robotic names.
For now, all Rabia, Annie and Jennie do is serving the customers pizza. Don’t even bother to ask them questions because you and I know what the response will be. And for some of the guys who like to make new girlfriends on every outing, I encourage you to try your luck.
The innovative Jafari is working on something new. He wants to make robots that will be able to respond to customer enquiries and maybe comments – compliments – as well. Who wouldn’t want to see robots with manners most humans don’t have?