Sunglasses made from Organic Solar Cells can Charge your Phone 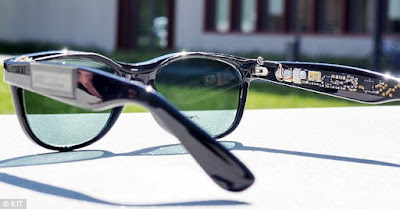 Solar panels have become a well-known source of electrical energy. A solar energy system is one of the main sources of renewable energy in the world today.
Unlike other processes of transforming energy, that emit C02 and other gases that have helped worsen the weather conditions. A solar system makes electrical energy from light in a very interesting way.
You are not disturbed by the generator sound or have to inhale the harmful gas it emits. All you get is clean steady and well packaged electricity. But it can be very expensive especially when needed for something big (that is, to produce a large amount of electrical energy).
The solar energy system is made up of three major parts:
You have the solar panel with the solar cells that do the work of converting light energy into electrical energy. You need a collection of solar cells to make up a solar panel.

Related: How does a Light Bulb Work?
And it is the solar cells that produce electricity from sunlight.
The battery obviously stores energy. The electrical signal produced by a solar power system is Direct Current (DC),  the load – our electrical appliances – make use of Alternating Current (AC), the inverter converts DC into AC.
Apart from the major parts mentioned, there are other very useful components that make up the solar energy system. But the focus is organic solar cells.
Like already mentioned, the photovoltaic cells, convert sunlight into electrical energy but you need a good number of them to make a solar panel that would produce enough electrical energy for homes and offices.
But there is another kind of solar cell and it is called an organic solar cell. Unlike the normal solar cells in solar panels we find on roof tops, organic solar cells are transparent and flexible.
Unlike the silicon solar cells which are heavy and rigid, organic solar cells are lighter and more flexible which makes them able to fit where silicon sells cannot.
German researchers have been able to make sunglasses using the organic solar cell. The sunglasses made using organic solar cells are transparent and can be produced in different colours.
This sun glass has two displays showing the ambient temperature and the solar illumination intensity. Some amount of energy produced by the organic solar cell sunglasses can actually be used to power a phone.
Other applications include using the transparent organic cells to make windows.
What’s really interesting is the part where you could just put on you sunglasses, relaxed or maybe walking while this device charges your phone.
Believe me when I say, Technology is interesting!
Related Articles
Converting Ambient C02 into Lithium-ion Batteries
Learn Video Game Development Free on YouTube
Tweet
Share
Pin
Share
0 Shares
Posted inConsumer Electronics Electricity Innovation
Subscribe
Login
2 Comments
Oldest
Newest Most Voted
Inline Feedbacks
View all comments

What you composed made a bunch of sense. However, consider this, what if you typed a catchier title?

I ain't suggesting your information isn't good, however suppose
you added a headline that grabbed people's attention? I mean "Sunglasses made from Organic Solar Cells can Charge your Phone" is kinda
boring. You might glance at Yahoo's home page and note how they write news titles to get people
to click. You might add a video or a pic or two
to get people interested about everything've got to say.
In my opinion, it would make your posts a little livelier.

Great tip. I visited yahoo. At Electronics Diary we have defined topics we write on, we have a way of presenting information and we also know the potential audience – unlike yahoo where any kind of information could surface. I appreciate your contribution but you must also know we are not one of those "make 100k in one hour" sites. Or "grow your traffic from 0 to 100k in 7 days" site. Nevertheless I get your point and I really like your contribution. Thank you