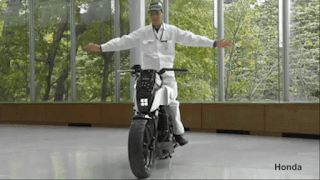 It is amazing, difficult to believe but amazement is a gift technology loves giving out.

On Wednesday, Honda unveiled a self-balancing electric motorbike. It can stand unaided and can also ride as well – unaided.

Honda’s new gadget can follow the rider around like a cool kid. And it does not just move in a single direction.
It can change directions without a rider on it. 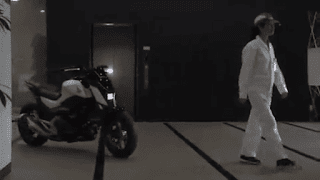 The design was inspired by Honda’s Asimo robot. Asimo is a robot that can move around on it’s own perfectly without falling.

It can dance, jog and also converse with human beings. Asimo can recognise faces and it is also able to distinguish voices even when there are several people speaking at the same time.

Honda figured a similar form of balancing could be possible for motorbikes and on Wednesday, the whole world witnessed the realization.

But how on earth does a motorcycle stand on its own without makin use of the stands? Honda said its “dream” motorbike, Assist-e, constantly assesses its position and adjusts the steering simultaneously to ensure it stays upright.

But believe it or not, there is a lot more to it than what Honda is telling us.
Honda wants to step up production to make the self-balancing electric motorbike available for everyday use.

Now that self-charging technology has been developed for motorbikes, Honda’s Assist-e could easily go mainstream. 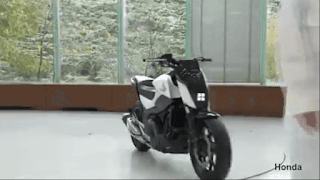 Honda hopes to reduce the number of low speed accidents with its latest product. According to a report from the department of transportation, USA, motorbikes are 37 times more likely to get involved in an accident than cars.

Alright now the next time you sit on a motorbike, just forget you ever read something like this, so your heart does not end up on your palm.

That sounds really scary, especially for those in regions where motorcycles are still a common means of transportation.

But hey James Bond, there are some real life moves that are sure to hand you a lovely death and a 15-minutes funeral.

Honda has not revealed when the self-balancing motorbike will be made available (in the market) but we expect it to be out sometime soon.

When it’s out, the update will be made available on our Twitter, Facebook and Google Plus pages.